Under the influence of the London government-in-exile's plenipotentiary František Němec, Hungarian postage stamps, postal stationery and forms were overprinted locally with "ČSR" in Mukačevo from 1 to 4 December 1944. In Mukačevo, a certain opposition had also formed against the emerging new constitutional solution of a cession to the Soviet Union.

The postal stationery was in use until 15 January 1945. They were cancelled by an altered monolingual postmark supplemented by a date imprint. In addition to this, a large-format rubber postmark (letter one-liner) and, as a rule, a censorship postmark also appear.

From the 1933 Hungarian series of picture postcards with the postmark "Turul without background" at 16 fillers (foreign nominal) - it comprised a total of 16 consecutively numbered postcards - two picture postcards were in stock at the post office: Picture number "C-10 Lillafüred" and "C-11 Tihany Abbey". There is a "draft" of both picture postcards for the later overprint. Instead of the later handstamp overprint, the "ČSR" was inserted using typewriter capital letters. Example: 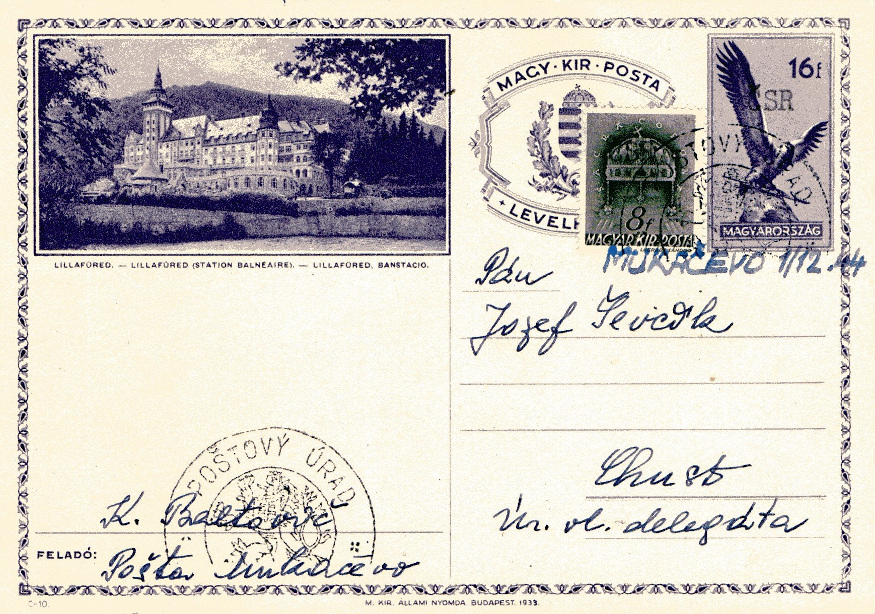 The cancellation was made by a post office service stamp without indication of place and handwritten "MUKAČEVO 1/12.44" in blue ink. The additional franking of 8 fillers, postage stamps from 1941, was already affixed at the post office and the picture postcard was sold with it.

This additional franking was also provided with the overprint described above. 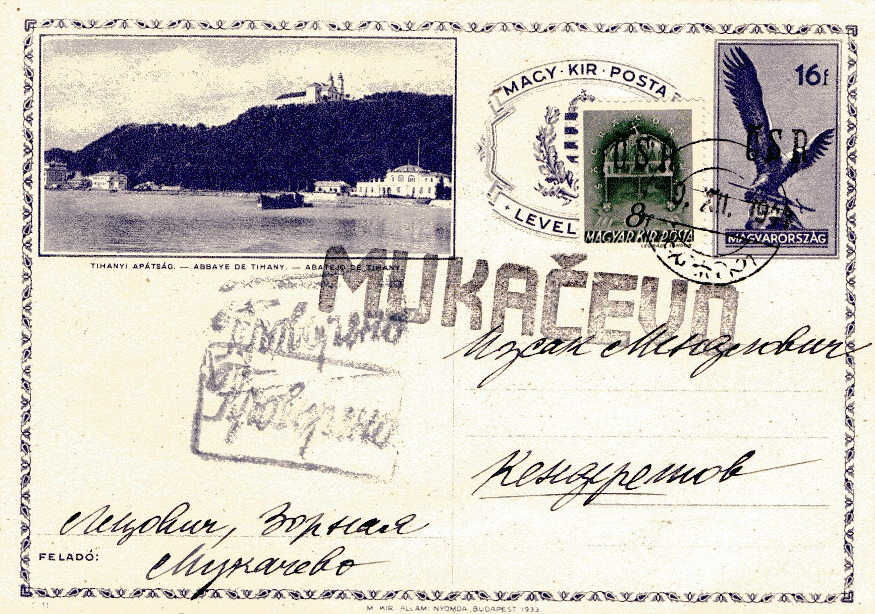 The cancellation was made by an altered local postmark with a date stamp "-7.XII.1944" in the date bridge, the rubber local postmark "MUKAČEVO" and the censorship stamp ("Provereno" in Cyrillic letters) in black-blue colour.

Do you have any comments or questions? Then feel free to write (in English) to the webmaster.

Unless otherwise stated, all items presented were in the possession of an ArGe member at the time of publication.